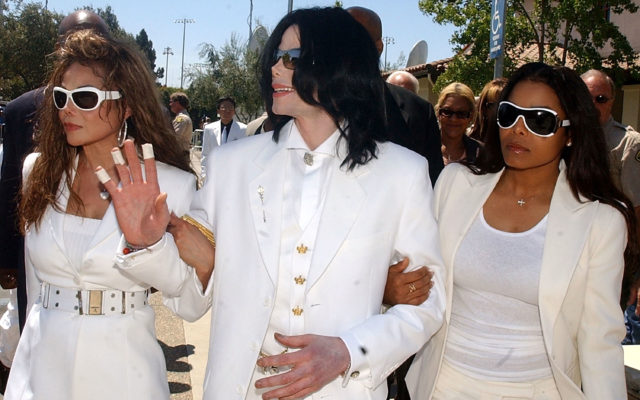 SANTA MARIA, CA - AUGUST 16: Defendant Michael Jackson with sisters LaToya Jackson (L) and Janet Jackson exit the Santa Maria courthouse for break during the evidentiary hearing in the Michael Jackson child molestation case August 16, 2004 in Santa Maria, California. Jackson who is not legally required to attend the evidentiary hearing, was on hand to hear his defense lawyers question Santa Barbara District attorney Tom Sneddon about what they claim was an illegal raid. Superior Court Judge Rodney Melville has set the jury trial date for January 31, 2005. (Photo by Ed Souza-Pool/Getty Images)

This time of year is understandably rough for Michael Jackson fans as the anniversary of his death is remembered yearly on June 29th.

His sister, Janet, shared a rare photo with fans on her Instagram page on the sad anniversary. The picture is presumingly from Janet’s “Poetic Justice” days and features her and brother, Michael, in all white.

Jackson simply captioned the picture with a solid white heart.

It’s been 12 years since Michael Jackson passed away, where were you when you got the devastating news?